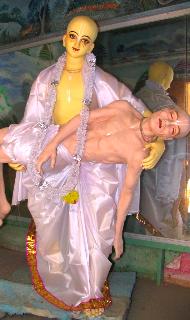 Thakura Haridasa was present during most of the Lord Caitanya’s pastimes in Nadia, and when the Lord went to Jagannatha Puri, Haridasa also went and took up residence there. Every day, after attending Lord Jagannatha’s mangala arati, Lord Caitanya would come to see Haridasa Thakura and bring him some of Lord Jagannatha’s prasadam. When Sri Sanatana Goswami and Sri Rupa Goswami would come from Vrindavana to Puri they used to stay with Haridasa Thakura. Haridasa, in order to maintain the etiquette, would not go near Lord Jagannatha’s temple but would offer his obeisances to the Cakra on top of the temple, from a distance. As he was considered to be a Mohammedan by birth, his presence in the temple would be objectionable to those who were caste conscious. He passed away in presence of Lord Sri Caitanya Mahaprabhu.