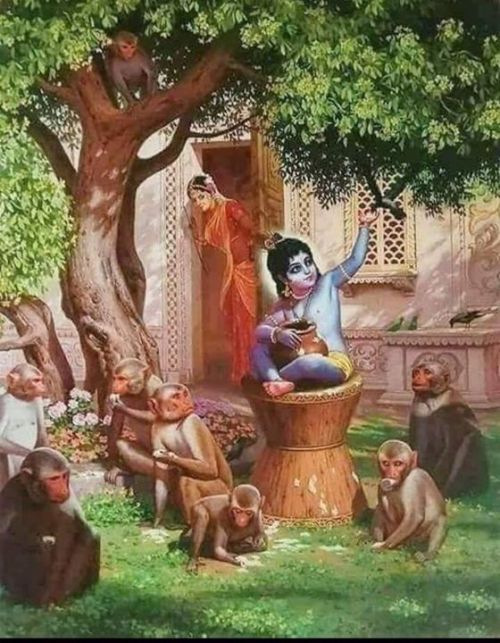 Monkey seva.
Sutapa Das: Govardhana is enchanting… and simultaneously educational. At every turn there is a lesson to learn. While pacing the peaceful perimeter path yesterday, a street vendor suddenly announced: “Monkey seva! Monkey seva!” It was an invitation to feed the mischief-making monkeys that had congregated. “Monkey seva is my thing” I thought, “I’ve been feeding this monkey-like mind for lifetimes!” Some nuts for our furry friends today, but the inner monkey has to diet. Walking a little further we encountered an elderly ascetic performing ‘dandavat parikrama.’ After diligently bowing prostrate 108 times in the same spot, he moves forward the length of his body, and repeats the process… with a vow to circumambulate the entire hill in that way. It’s a vow that may take ten years to complete. What focus! What dedication and determination! I don’t think my monkey-like mind would cooperate with that one.