12,000 attend the inauguration of ISKCON Farmington Hills, Michigan including a congresswoman and Mayor.
On the weekend of April 20th, 2018, Radhanath Swami joined the devotees of ISKCON Farmington Hills, Michigan, and other guests, as together they inaugurated their new temple and installed the beautiful deity forms of Radha and Krishna (Sri Sri Radha Gopijan Vallab). The festival was filled with unforgettable moments that will treasured by all who attended.

On Friday, Radhanath Swami participated in the installation of Srila Prabhupada’s murti with other god brothers and sisters and attended the first arati as Virabadra Ram Das, visiting Executive Director of New York’s Bhakti Center, led a rousing Guru Puja kirtan. Later, Radhanath Swami presided over the netronmelan (eye opening) ceremony of Sri Radha Gopijan Vallab. Auspicious items were shown to Radha and Krishna as the gathered community had their first chance to see Their beautiful forms.

The next day Radhanath Swami took part in Pran Pratishta ceremony wherein Radha and Krishna are invited to reside in the temple. Then he spoke at length on the significance of the rituals of temple worship. Later, he witnessed the Abhishek ceremony of the deities.

Local congresswoman Christine Greig and Farmington Hills Mayor Ken Massey of were present for the occasion.

In the evening Radhanath Swami did the first Maha arati to the deities and then took a guided tour of the newly renovated temple building and met with many of the local devotees. On Sunday morning he gave Srimad Bhagavatam class which Christine Greig also attended. Beautiful Stain Glass windows just got installed (about 57 in all) in the ISKCON Temple in Jaipur. (Album with photos)
Find th… Bhaktivedanta Players on Nrsimhadeva caturdasi (Album of photos)
Radha Mohan Das: Bhaktivedanta Manor had elaborate Nrsimhadeva caturdasi celebrations last Saturday. The morning included a children’s drama, a fire yajna, a special class and many participated in a huge Hari nama in central London. In the afternoon there was abhiseka and to round everything off before the feast, the Bhaktivedanta Players had the audience riveted with a lively drama depicting the pastime of Lord Nrsimhadeva and Prahlad Maharaj.
Find them here: https://goo.gl/9Y9gRr Nrisimha Caturdasi + Kirtan Simha 2018 at Simhachalam, Iskcon Germany (Album with photos)
Srila Prabhupada: One’s natural tendency is to serve because a living entity is an eternal servant of God. The living entity wants to serve, but because of his forgetfulness of his relationship with the Supreme Lord, he serves under the modes of material nature and manufactures various modes of service, such as socialism, humanitarianism and altruism. However, one should be enlightened in the tenets of Bhagavad-gita and accept the instruction of the Supreme Personality of Godhead that one give up all natural tendencies for material service under different names and take to the service of the Lord. One’s original natural tendency is to act in Krsna consciousness because one’s real nature is spiritual. The duty of a human being is to understand that since he is essentially spirit, he must abide by the spiritual tendency and not be carried away by material tendencies. >>> Ref. VedaBase => SB 6.1.53
Find them here: https://goo.gl/fqT352 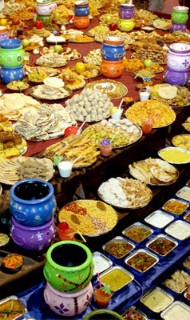 Here is a list of some effects of eating bhoga: (1)Makes the mind wicked. (2)Causes bewilderment. (3)Destroys clear thinking. (4)Causes lust. (5)Dampens the enthusiasm for devotional service. (6)Creates material desires. (7)Causes atheism. (8)Creates impersonal or mayavadi thoughts. (9)Causes one to commit vaisnava aparadha. (10)Causes one to commit Nama-aparadha. (11)Cause indifference to Bhakti. (12)Causes one to be inattentive while chanting. (13)Clouds fine memory. (14)Dulls the brain. (15)Breaks our concentration. (16)Makes one less serious in devotion. (17)Causes loss of faith. (18)Makes one casual in the matter of devotion. With a list as long as this we can see how the dangers of eating the wrong foods cannot be underestimated. END_OF_DOCUMENT_TOKEN_TO_BE_REPLACED 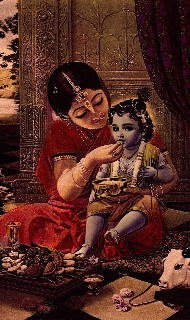 In many places in his books Srila Prabhupada describes the wonders of prasadam, food prepared with devotion and offered to Krishna. Prabhupada discusses such merits of prasadam as how it effectively immunizes one against the contamination of the material nature, how it frees one from becoming a ghost after death, and even how it is considered ecstatic nectar from the lips of Lord Krishna. In the Chaitanya-charitamrita (Madhya-lila, 4.93, purport) Srila Prabhupada writes: The Krishna consciousness movement vigorously approves this practice of preparing food, offering it to the Deity, and distributing it to the general population. This activity should be extended universally to stop sinful eating habits as well as other behavior befitting only demons. A demoniac civilization will never bring peace to the world… . When the people take to eating only prasadam offered to the Deity, all the demons will be turned into Vaishnavas… . It is then and then only that a peaceful condition can prevail in society. END_OF_DOCUMENT_TOKEN_TO_BE_REPLACED