Sri Mayapur Dham Harinam Sankirtan (Album with photos)
Srila Thakura Bhaktivinoda, standing on the balcony of his house in God…

HH Tamal Krishna Goswami Disappearance ceremony in Sydney 27/02/17 (Album with photos)
Srila Prabhupada: Only an animal is not pessimistic about life in this material world. A man is capable of knowing the threefold sufferings of material life. There are sufferings of the mind and body, sufferings offered by other living entities, and sufferings forced upon us by natural catastrophes and the laws of nature. The world is full of suffering, but under the spell of maya, illusion, we think we are progressing. Ultimately, whatever we do, death is there to annihilate the results. Under these circumstances, there is no happiness within this material world. We may make all arrangements for happiness, but at any moment, death may capture us. So what happiness can we have here? Therefore an intelligent man is always pessimistic about material life. He knows that he will not be allowed to be happy here. As we further advance, we understand the orders of Krsna: sarva-dharman parityajya mam ekam saranam vraja. “Abandon all religions and just surrender unto Me.” [Bg. 18.66] We must surrender to the Supreme Personality of Godhead, and after surrendering and understanding Him fully, we can go to the world that is full of bliss, knowledge, and eternal life. Unless we take a pessimistic view of this material world, we will remain attached to it, and the repetition of birth and death will ensue. >>> Ref. VedaBase => William James [1842-1910]
Find them here: https://goo.gl/2Zzl1S

Mahadyuti Swami Sannyasa Ceremony (Album with photos)
Srila Prabhupada: You have to accept anything from the authorized source. So according to Vedic civilization, all knowledge is received from the Vedas, perfect authorized source. Sruti-pramana, evidence from the sruti, from the Vedas, that is perfect. Therefore, according to Vedic civilization, if you want to establish something you have to quote the section or the injunction from the Vedas. Then it is perfect. In learned circle you cannot say anything hodgepodge. That will not be accepted. If you support your statement from the evidence of the Vedas, then you are accepted as authority. Therefore our principle is… Not only our; this is the Vedic principle. You’ll find Caitanya Mahaprabhu giving instruction to Sanatana Gosvami, to Rupa Gosvami, or He was talking with Ramananda Raya – in Caitanya-caritamrta you’ll find – and quoting support from the Vedas. Although Caitanya Mahaprabhu is God Himself, Krsna, Krsna-Caitanya, but He is not, what is called, autocratic or, what is called, dictator. No. You’ll never find Him. Whatever He’ll say, immediately He is supported by Vedic evidence. He can say anything. He can manufacture anything. No, that He does not do. He does not violate the principle. In the Bhagavad-gita also… Krsna is the Supreme Personality of Godhead. He’s also quoting from Vedas. He does not say, “I say.” He says, but He says on the Vedic authority. He doesn’t say anything superfluous. ——From Srila Prabhupada’s lecture on Bhagavad-gita 16.9 – February 5, 1975, Honolulu
Find them here: https://goo.gl/H1c9BA

Remembering the ‘Quiet Beatle’
February 25 is the birth anniversary of George Harrison, the popular British songwriter and musician known best as a member of the famous Beatles Group.
Harrison , known as the “Quiet Beatle”, passed away at the age of 58 on November 29 ,2001 .He was cremated and his ashes were scattered in the Ganga , according to his wishes. Harrison had embraced the Hare Krishna tradition and remained a devotee till his death. In the summer of 1969, he produced the single “Hare Krishna Mantra”, performed by the devotees of the London Radha Krishna Temple. That same year, he and fellow Beatle ,John Lennon, met A.C. Bhaktivedanta Swami Prabhupada, founder – acharya of the International Society for Krishna Consciousness (ISKCON). Soon after, Harrison embraced the Hare Krishna tradition and became a lifelong devotee.
To read the entire article click here: https://goo.gl/p11cmc

Kirtan Mela Mayapur 2017 (Album with photos)
Srila Prabhupada: Krsna consciousness means, “I am Krsna’s,” that’s all. Krsna says, mamaivamsah: “All these living entities, they are My part and parcel.” So you have to understand this relationship with Krsna, that you are Krsna’s. And Krsna, what is Krsna? Bhagavan. -From Srila Prabhupada’s lecture on Bhagavad-gita 16.1-3 – January 29, 1975, Honolulu
Find them here: https://goo.gl/a2URKQ 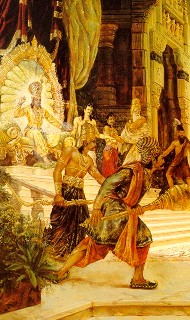 There exists an enormous market in the genre of gossip and rumour, which explains the great popularity of TV soap operas the world over. Repetitive themes of spiritual scandal, heresy, and deviation make for indulgent absorption, especially for one experiencing a dreary devotional continuation. Such curious excitement about the who’s who in spiritual circles issuing from suspect forums can be the stuff that kills the cat of the devotional creeper without even knowing it. Exercising the right for free speech and discrimination and disguising all manner of invectives and negativity with polished philosophy and zealous concern, these expressions are intended to destroy tender faith, and help harden the heart to repeat the abusive cycle of fault-finding in others. Faultfinders are fond of using various tactics to impose their superiority in argument, but when pitted against proper adherence to vaisnava culture these same tactics become their downfall. The use of certain types of logic though appealing to many, in fact lay bare the inner workings of a distressed condition, much like seeing an ugly tortoise without it’s shell. END_OF_DOCUMENT_TOKEN_TO_BE_REPLACED

Fault finding is natural for the conditioned soul. We don’t have to learn how to do it or take training to get better at it. In fact, for many people it is an addiction which gives them some form of perverted pleasure. We could call this the Ramacandra Puri complex. Ramachandra Puri was a contemporary of Lord Caitanya. He had an intense need to fault find. He took delight in finding faults in others, even where there were no faults. Fault finding was his life and soul. Fault finding can be so addicting that some people have to get their daily fix. And it’s easily available everywhere. You can get a fix from all kinds of radio talk shows, news magazines, comedians, and TV shows (fault finding sells). Or you might seek out friends or co-workers to feed the addiction. As Elanor Rosevelt said, “If you don’t have something nice to say about someone, sit next to me.” END_OF_DOCUMENT_TOKEN_TO_BE_REPLACED