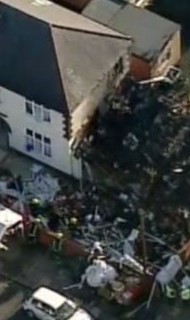 Hare Krishna monks have finally moved into their new home after an explosion that destroyed their former temple six years ago. Thirty people escaped just before the Iskcon Temple in Leicester exploded on 3 September 2010. A Leicester family donated a former bank in Granby Street to Iskcon, and renovation work to the Grade II building has now been completed. The monks are taking residency on the upper floors. The space also includes a meditation area, kitchen, classrooms and offices. END_OF_DOCUMENT_TOKEN_TO_BE_REPLACED

Lord Nrisimhadeva’s mercy even on non-devotees
The mercy of Lord Nrisimhadeva at Mayapur is famous and I have an interesting story in brief.
I know a couple Ashok Ghosh and his wife Shila Ghosh from Kolkata, who married twelve years ago. Four years before when I met them, they shared their worries with me. Like other childless couples, who undertake treatments or throw faith in magical amulets, this young couple too were attracted to artificial means to have a baby. Incidentally, I suggested them to take shelter of Jagrata Nrsiimhadeve at ISKCON Mayapur. In the year 2006, Nrisimha Caturdasi day, the couple came too Mayapur and observed the Vrata seriously, approached the Lord, and paid their sincere offerings to Him with full surrender.
A year later, when I visited Calcutta, incidentally I met the couple and found them extremely happy. To my amazement, I saw carrying a small baby in the lap. I enquired who the child was? The couple narrated to me the blessings of Lord Nrisimhadeva upon them. This is a clear example of the Lord’s mercy upon anyone who takes shelter of Him. This is an instance, even a non-devotee has been blessed with His mercy. The Lord can bless anything to anyone if surrenders to Him and incidentally utters His holy name even once.
The ancients performed putrakameshthi yajna to invoke the divinities and bless the childless couple to have progeny. In kaliyuga, we short-lived humans forgot those tedious Vedic yajnas. In this disastrous age, surrendering to the God and uttering His holy names is the greatest sacrifice one can offer as Lord Caitanya instructed us through His divine Grace A. C Bhaktivedanta Swami Prabhupada. As the Vishnupurana says, “Ten years of tapasya in sattya yuga equates to one year of tapasya in tertayuga, and it equates to one month of tapas in dvapayuga and it equates to just one day of tapasya in kaliyuga. Anyone who surrenders to the Lord and utters His holy name even once, the merciful Lord will bless him all his needs and at the end will offer him a chance to reach the Supreme Destination even the king of heaven Indra is ineligible to obtain. Therefore, let us always recite the mahamantra –
HARE KRSNA HARE KRSHNA KRSHNA KRSHNA HARE HARE
HARE RAMA HARE RAMA RAMA RAMA HARE HARE

Kurmakshetra.
Radhanath Swami: According the the Mahatmya of this place, it is described that Vedavyas was telling one great muni that this place of Kurmakshetra is very, very sacred and he told the story of this temple. There is a mountain called Shwetacala Parvat. And near that mountain lived a king. His name was Shweta Chakravarti, and his wife’s name was Vishnupriya. Vishnupriya was very chaste, very pure in heart, and had great devotion to Lord Krishna. On an Ekadasi day she was performing pooja in her temple room. At that time her husband had very great lusty desires. He went to her room to enjoy his lusty desires with his wife. So being a chaste woman she greeted him with great hospitality, had him sit on a golden throne. Then, she went back into her pooja room to continue her devotional service. She started to pray very helplessly to Vishnu, that today is Ekadashi, I have made vow that I will not engage in any type of sinful activity. I will completely immerse my mind only in devotional service. But my husband is approaching me with lusty desires. Please save me, please protect my vows to you on this holy Ekadashi day. This is a great lesson for any of you ladies whoever get put in this situation. The Lord always protects His devotees. As she prayed to Lord Vishnu, Kurmadeva who protects the stability and the foundation of devotee’s vows, He ordered Gangadevi that this king wants to violate the chastity of the vows of my devotee, go stop him. So Gangadevi appeared in the temple and then with a terrible, terrible violent current, she came flowing out of the temple room, and right after King Shweta Chakravarti. When he saw the river Ganges just flooding forward, rushing towards him, he became very frightened and ran away. He was running and running and running but everywhere he went, the Ganges was chasing after. He was running, running, but it was chasing after and finally he climbed to the top of the Shweta mountain. And there he asked his minister what’s happening? Why? His chief minister told him, that your wife is a very great devotee of Lord Vishnu, and you had lusty desires for her on Ekadashi. She prayed to Vishnu to save her, and Kurmadev, just to protect His devotee send the river Ganges, just to stop you. When the king heard this he felt so guilty, terrible, he was thinking that I am such a sinful person. He began to repent, but worse then that, he was thinking that I made an offense to my wife, and what kind of great devotee is she, that Lord Kurmadeva personally arranged to protect her? He decided, he had to perform great, great tapasya to purify himself from this offense. So he was repenting so much. He was just getting down on himself so bad, and finally he fell unconscious. Then Narada Muni appeared. Narada Muni said, “How can I serve you?” He said, “Please grant me a benediction, grant me the benediction that I can have darshan of the great deity of Kurmadeva.” So Narada Muni taught him a Kurma Mantra and sat on the shores of the ocean of the sea, and explained him the philosophy of Krishna Consciousness very nicely.
Read more: http://goo.gl/avxcaV 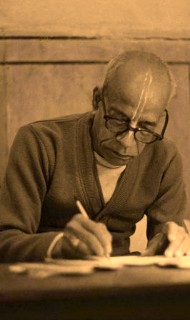 Dear Swami, If one has rejected God, will God still take him back? Yours, Miss Anita Keough My dear Miss Keough, We are all here due to mistakes. Krishna only cares for our love. Dear Swami, Is it necessary to pursue all the different yogas in turn in order to reach the Ultimate? Yours truly, John The Dear Mr. The, You can walk the stairs to the top of the Empire State Building if you like. But the elevator is also there. Try chanting Hare Krishna. Dear Swami, Why do so many people neglect the Lord, if He is the center of everything? Thanks, Brendan Jones Dear Mr. Jones, Why do some men lie down on the Bowery Street? There is independence, and independence means one can choose wisely or foolishly. Ever your well-wisher, A.C. Bhaktivedanta Swami END_OF_DOCUMENT_TOKEN_TO_BE_REPLACED 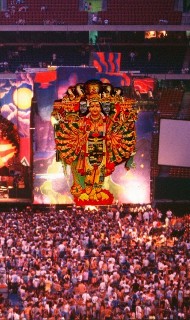 During the summer we follow the rock concert tours. That is a very ecstatic experience. Vijay Prabhu is one of my inspirations for doing these concert tours. I think he might have been the one who gave me my first book at one of those concerts in the summer of 1994. I had gone to a “Grateful Dead” concert in Washington DC, and one of my friends had gotten a book from one of the devotees, the “Journey to Self Discovery.” I borrowed that book from him. I had not met the devotees personally at that concert, but there was a big group of American fired up Sankirtan devotees there. I got this book, and from that book, even before even meeting devotees for several months, I started chanting Hare Krsna, and following the regulative principles. I became a vegaterian, and just got a lot of realizations about Krsna Consciousness, just from this one book. Gradually I came in contact with devotees near to where I was going to college. Eventually I joined. I have a lot of faith in these books, because although I hadn’t met the devotees, just this one book had the complete formula for awakening Krsna Consciousness. This book contained everything needed for giving one a complete start in this process of devotional service, of going back home, back to Godhead.
END_OF_DOCUMENT_TOKEN_TO_BE_REPLACED

Never Alone!
ISKCON of DC: There is a beautiful story of Srila Prabhupada in 1966 sitting by himself on a bench in New York on a snowy, cold January morning. Another gentleman came and sat beside him and they began to talk. Perhaps feeling a bit sorry for Prabhupada, he asked him if he knew anyone in New York. Prabhupada held up his chanting beads and said, “I am never alone.”
Most of us will experience being alone at some point in our life. For some it’s an extended sense of loneliness. For others it’s now and then. Sometimes, ironically, it’s in times of success, or joyful gatherings, that we may feel most alone. At other times, loneliness strikes when we are ill, grieving, or failing in some way.
In truth we are always alone in the small space of our body and mind. No one can feel what we feel, or think what we think; efforts to be heard or understood often end in frustration. At times our greatest sense of loneliness and disconnect is when we wake up in the middle of the night and our mind is churning it’s endless river of thoughts. The world is asleep and we are wide awake and worried about something.
When we come to these moments of lucid and acute feelings of loneliness our beads can save us from spiraling into despair. Many things happen when we chant the Hare Krishna mantra, and this is one of them. We are reminded that Krishna is our friend and is always there. Not only are we not alone, but we can feel a sense of connection, a sense of comfort. Suddenly life seems bearable, manageable, and eventually, understandable.
This has been my experience many times. Chanting sets me on solid ground – even, and especially, in the middle of the night when my mind is busy convincing me otherwise. The nice thing about the mantra is you don’t have to think about what to say to God, what to ask for, what to pray – just chant. The mantra says it all. It is an eloquent request for shelter, for service, and for a chance to love and be loved.
In the dark hours of our life, find the mantra and allow it to find you. Hold it and be held. It is then we will experience what Prabhupada spoke of on that park bench – never feeling alone. That’s the big gift of this small exchange on a cold winters day in New York in 1966.