Govinda Dev temple unharmed by tremors; claimed ASI
Vrindavan, April 28th 2015: Following two major aftershocks on Sunday afternoon after a series of tremors in the wake of the quake measuring 7.9 on the Richter scale that struck Nepal on Saturday, the devotees and the priests of Vrindavan got concerned about the safety of the architectural heritage temples and buildings of Vraja.
A rumor was spread on Monday that a crack had appeared on the wall of the 16th century Govinda Dev Temple of Vrindavan. On Monday morning the temple priests Shri Sukumar Goswami and Shri Sanjay Goswami expeditiously informed the ASI officials at the regional office in Mathura about the crack in the red sand stone building after the tremors jolted many parts of Vraja on Saturday and Sunday.
Subsequently conservation assistant SK Kulshreshtha, visited the temple and denied that any crack had appeared due to the aftershocks. He said that it was nothing but the joint of two stones, which are intact. Shri S. K. Kulshreshtha said, “We are maintaining the temple in the condition in which we got it. We can’t alter anything, as per the guidelines set by the Archeological Survey of India. We can’t remove those stones which have scratches on them from before. We simply can’t replace them with the new stones.” Later, M.C. Sharma, the Deputy Superintending Archaeological Engineer also visited the protected monument to ensure if the temple remained unscathed by the earth quake.
Govinda Dev Temple is the first temple of Vrindavan, was built in 1590 by Raja Man Singh of Jaipur under the guidance of Shri Rupa Goswami during the reign of Mughal emperor Akbar. There are four protected monuments in Vrindavan, namely Govinda, Madan Mohan, Yugal Kishore and Radha Ballabh. The Archeological Survey of India takes care of the maintenance of these temples.

Hare Krishna for salvation in Estonia (3 min video)
In Estonia’s capital Tallinn, where nine out of 10 people are agnostics and atheists, Krishna believers are taking to the streets with a quest for the divine.
Watch it here: http://goo.gl/UeCAf1

Hare Krishna! A Hospice Miracle—Serving Jayananda’s Mother
Often, while I care for or bathe patients who are unable to do such tasks for themselves, I chant or sing the Hare Krishna maha-mantra. On this particular morning I was caring for a woman named Jane Kohr, who had been with us for almost a week. She was a kind and polite person, and I enjoyed the time I spent with her. Around 8 a.m. on August 6, I entered her room and found that she was getting closer to leaving her body. She was unresponsive to verbal cues, and her body was limp. I sang the maha-mantra one last time, while she received her final bath. Hospice staff called her family, who were always friendly and appreciative for her care. When I was finished, I spoke with some of the family members in the hall. Jane’s grandson approached me to thank me and then pointed to his forehead and to my tilak and asked if I was a Hare Krishna. I smiled and said that yes, I was a devotee of Krishna. “Well,” he said, “then maybe you know of my uncle Jayananda.” “The Jayananda?” I asked. “Yes,” he said. And he told me how his uncle had built the Ratha-yatra carts. He then went in to inform his mother that I was a Hare Krishna. Gaynelle, Jayananda Prabhu’s sister, came out of the room and said that she was so happy that a Krishna devotee had cared for her mother. The whole family expressed that it meant so much to them. Gaynelle kept saying that she couldn’t believe that I was a Hare Krishna. She said that she told her mother but wasn’t sure that her mom could hear her. I said that I had a feeling she already knew, and I laughed. Read the entire article here: http://www.dandavats.com/?p=17092 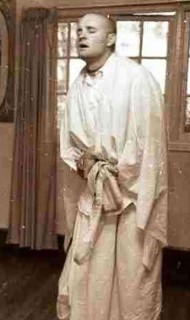 Gaynelle, Jayananda Prabhu’s sister, came out of the room and said that she was so happy that a Krishna devotee had cared for her mother. The whole family expressed that it meant so much to them. Gaynelle kept saying that she couldn’t believe that I was a Hare Krishna. She said that she told her mother but wasn’t sure that her mom could hear her. I said that I had a feeling she already knew, and I laughed. END_OF_DOCUMENT_TOKEN_TO_BE_REPLACED

2015 VIHE Bhakti Shastri Course
We are heartily inviting all serious students to this year’s VIHE Bhakti-sastri course. The Bhakti-sastri course is a systematic study of Srila Prabhupada’s books. Srila Prabhupada wanted all of us to deeply study his books, so that we could become better preachers and teachers, and, very importantly, achieve a clear understanding and application of the beautiful science of devotional service. Shri Vrindavan Dham mercifully provides a unique environment to enhance one’s taste and appreciation for the treasures of the direct path of bhakti.
Read the entire article here: http://www.dandavats.com/?p=17086