New year eve Harinam: Queen st Auckland New Zealand (Album 3 photos) Srila Prabhupada: “Hare Krishna, Hare Krishna, Krishna Krishna, Hare Hare, Hare Rama, Hare Rama, Rama Rama, Hare Hare-these sixteen names composed of thirty-two syllables are the only means to counteract the evil effects of Kali-yuga. In all the Vedas it is seen that to cross the ocean of nescience there is no alternative to the chanting of the holy name.” (Kali-santarana Upanisad)
See them here: http://goo.gl/DNzFqG

Nityam Bhagatavata Sevaya Team: By the mercy of sadhus and Vaishanavas, the third issue of NBS is now online.Read More… 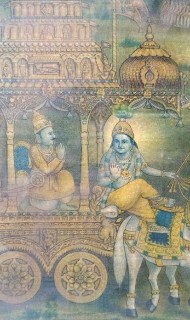 “This time new year begins with ‘Vaikuntha Ekadashi’ (the only one Ekadasi that all people in south India try to observe). This is very auspicious. Previous year started with New Moon day” my aunt said very thoughtfully. Her statement stirred many thoughts in me resulting in wonderful realization. “Wow! Indeed, the New Year 2015 is a special year with many great events. Surely it inspires everybody towards the golden jubilee celebrations of ISKCON in 2016” my inner sense happily said. By the way, what are those inspiring events that will be appearing in 2015? Let’s have a review of them! END_OF_DOCUMENT_TOKEN_TO_BE_REPLACED

Mantra Choir inspired by the success of their recent Virtual Choir, shall be kicking off the New Year with a brand new initiative!
Following hot on the heels of “Giri Govardhan” are now creating an even more adventurous piece namely… “Mahaprabhu”
Read more about this event in which you can participate from whatever part of the world you are simply with your mic and webcam here: http://goo.gl/f7pCLo

Radhakunda: 108 tons of bhoga offering on 31 December! (Album 3 photos)
Srila Prabhupada: “The essence of all Vedic knowledge-comprehending the three kinds of Vedic activity, the Vedic hymns, and the processes for satisfying the demigods-is included in the eight syllables Hare Krishna Hare Krishna. This is the reality of all Vedanta. The chanting of the holy name is the only means to cross the ocean of nescience.” (Narada-pancharatra)
See them here: http://goo.gl/amDBdS

Pablo Zalaquet, mayor of Santiago, Chile, receives Srila Prabhupad’s books
Srila Prabhupada: In the material world, everything is full of anxiety
(kuntha), whereas in the spiritual world (Vaikuntha) everything is free from anxiety. Therefore those who are afflicted by a combination of anxieties cannot understand the Hare Krishna mantra, which is free from all anxiety.
(Sri-Caitanya-caritamrta, Adi-lila, 7.74 Purport)

SRI JAGANNATHA MANDIR, ISKCON Malaysia Head Quarters helps school children (Album 32 photos)
As we head towards year-end, one powerful way to exit it brilliantly is by giving out, even a little would suffice to those really in need. Sri Jagannatha Mandir took the opportunity to exit the year in this manner, by reaching out to needy school children around the area of Bandar Kinrara, Puchong. Some 75 children were identified and provided with basic school items such as school bags, shoes and uniforms. They were also awarded with small treasures, Srila Prabhupada’s books that could transform lives. Devotees from Sri Jagnnatha Mandir have been performing house preaching activities in the said area and it was during this time that the sponsor thought this small assistance could help ease the burden of parents living in that area. As how any noble act gets appreciated, this sponsorship program too received kudos from the public as well as devotees. YB Senator Dato Dr Logabala Mohan Jaganathan(Deputy Minister, federal Territories) @ His Grace Logabandhu Gauranga prabhu and His Grace Simheswara Prabhu, ISKCON Malaysia regional secretary gave away the gifts for the students. The students were very happy receiving their gifts and also being part of the Sunday love feast. Hari Bol!
See them here: http://goo.gl/SbVxZJ